EMPATHY FOR THE WICKED 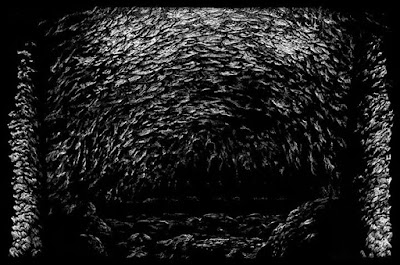 We have new vinyl and more heaviness to offer. Empathy for the Wicked is now available for order HERE from our good friend Golden Mantra. You can hear the entire beast at our bandcamp page (PWYW download). Empathy for the Wicked is our first release recorded live on an industrial estate in urban Northumberland encircled by the dregs of humanity. The first track was originally recorded for the cassette split with Horse Latitudes and Coltsblood which we played each night on our 2014 tour. During that session, we continued recording through the night and droned out the riff which became the second side to Empathy for the Wicked.

"As heavy as it gets...the prefect balance between noisy, gritty atmosphere and murderous sonic rampage...like meditation, but for all things evil"
The Sludgelord

"Ommadon are cartographing the surface of a dark, dark planet that the sun is unable to reach. They really take their time to construct their music, with the resulting sonic walls capable of sucking out all light"
Cvlt Nation

"When it's over, you feel as if you've experienced something supernatural; like you have seen things which you didn't think you could see, all through your ears. Almost as if mud pools could make music. Fantastic."
Echoes and Dust

"The lowness, the heaviness, and the all-round vibrations captivate you and suck you in. If black holes were music, this is probably what they would sound like.
Exclaim